I have a Mecool KI Plus android box since so many years. It has been in a drawer collecting dust after I moved on to an official androidTV stick (CCC Airstick 4k) that I got from japan. The reason being the Mecool KI Plus I is unbearably slow even on its stock firmware (android). I had modded the box to run androidTV in the past but still too slow. Recently I came across Coreelec. It is basically a trimmed down linux (Debian based) just to run Kodi. Kodi is a powerful media player on its own and features can be added via a plethora of add-ons. Coreelec just revived my Mecool KI Plus to a powerful TV server. 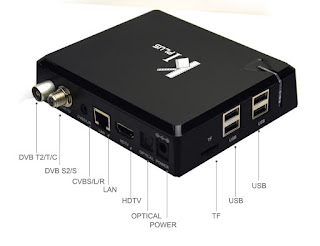 The good thing with KI Plus is that is has built-in DVB T2 and S2 combo. T2 is tuner for current terrestrial TV broadcasting system used in several countries including the UK and Malaysia. Malaysian Gov announced migration to digital TV broadcasting and it is on DVB-T2! So my goal is to use the box to tune into local digital TV and stream them over local area network (LAN) to my airstick. This is done by installing latest version of Coreelec (9.2.0). Coreelec also come with TVheadend add-ons. TVHeadend is going to be the server that manipulates the build in tuner and serve the stream to my androidtv stick. Steps to get this done:

1. Download latest Coreelec Build 9.2.0 from their webstite.
2. Prepare a thumb drive. Note that I used a thumb drive instead of a microsd card. I got Sandisk Ultra Fit 16GB for this purpose.
3. Write Corelec to the disk. I used balena-etcher.
4. IMPORTANT: Once completed with balena-etching, copy the correct dtb image file to the root folder of the thumb drive. When you download from Corelec site, select new istall --> then select correct device from the list. In my case, the dtb needed is gxbb_p200_k1_plus. Use 7zip to open the downloaded image and copy from 'CoreELEC-Amlogic.arm-9.2.0-Generic.img.gz\CoreELEC-Amlogic.arm-9.2.0-Generic.img\0.fat\device_trees\' the said file into the root of the thumb drive. MUST rename the file to dtb.img. Hint* use 'Open Inside' in 7zip.
5. Stick the thumbdrive into correct port at the KI Plus. Hint* Top left slot - the one next to sdcard slot.
6. Reboot to Coreelec. I downloaded an app from playstore for this so that I don't have to poke the recovery hole :). Hint* Booting Coreelec == Libreelec method
7. Voila!.. KI Plus should now boot to the new shiny and fast Corelec!!